Toph is one of the best characters on Avatar: The Last Airbender END_OF_DOCUMENT_TOKEN_TO_BE_REPLACED

Uncle Iroh loves his tea! And that’s a fact. But who’s to END_OF_DOCUMENT_TOKEN_TO_BE_REPLACED

It’s no surprise that our favorite characters grew. This article would be discussing the adult Toph and how she lived her life. It’s hard to fathom, but eventually, we come to terms with the fact that our favorite characters became old. Adult Toph lived a full life after the defeat of Fire Lord Ozai. We see her in the Legend of Korra series, alive and back aching. She also feels shocked about her back killing her. She still doesn’t understand how she grew so old.

As far as we know, Toph never got married to anyone exactly. Instead, she had her two children Lin and Suyin, for two different men. That is, they were born out of wedlock. In The Legend of Korra, we find out that Lin’s father, the first daughter, is a man named Kanto.

We recall Toph saying in the Legend of Korra series that it didn’t work out between them.

This was mostly the issue that caused the rift between Toph and Lin. Unfortunately, this eventually became a full-fledged fallout.

Avatar The Last Airbender: Toph Action Figure Learn More
We earn a commission if you click this link and make a purchase at no additional cost to you.

Adult Toph had quite the adventure in her prime. She was not always as old and frail as we see her in The Legend of Korra. After the defeat of Ozai, the Team went on to accomplish great things that would pave the way for a brighter future. Aang and the rest of the team created a city where all benders could be united as one and live in harmony.

They named it Republic city. Toph was the first chief of police in Republic city. After she got the hang of metal bending, she went on to create an Academy. Although there is no live animation series depicting this event, an elaborate and extensive comic book series tells of Toph and her metal bending adventures. She created an Academy to train young earth benders who could bend metal as well as she did.

This would make way for the future as the Republic city police have many benders of which primarily bend metal. She became the chief of police in Republic city shortly after it was created. She was the best candidate to maintain order as chaos always arises everywhere. The peace they had fought to win became so precious to them, and they sought to keep it at all costs.

A flashback of Toph and Aang chasing after a criminal named Yakone hinted at the adventures they had. But, unfortunately, Yakone was a blood bender, and as Aang points out to Toph, he wasn’t an ordinary criminal.

Toph gets out of the open-roof police squad car and sees Aang. She fires at him, saying she would handle this. When Aang tells her his help will be required, she softly replies by giving him the go-ahead to come with her, calling him twinkle toes. He gets mildly irritated and tells her he’s forty years old now. He asks if she can stop with the nicknames of which she declines.

The Toph gave birth to Lin twenty years after the conclusion of the hundred-year war. Her daughter inherited her Earth bending abilities. She also trained her to master metal bending and even seismic sense. This is a skill that Toph perfected due to her lack of sight.

Despite Toph’s good intentions as a single mother, she refused to discuss Lin’s father with her, which weighed heavily on her daughter. She felt that this was a way to protect her daughter from the harm she didn’t need to face. This did the exact opposite of what she intended, instead of what Toph aimed at, protecting her child. She sucked badly at parenting, probably due to her own parents and their horrible parenting. 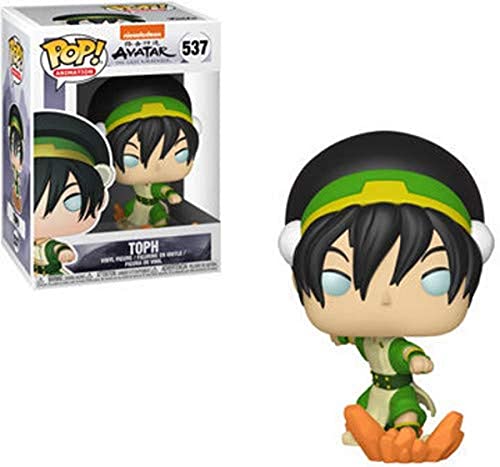 Funko POP! Animation: Avatar - Toph Learn More
We earn a commission if you click this link and make a purchase at no additional cost to you.

Despite this, Lin continued to have respect for her mother as the Chief of Police. She did, however, maintain her anger at Suyin being the cause of Toph’s premature retirement. As a result, their relationship became strained, and by 154 AG, they had ceased communicating with each other.

When they reunited by chance in 174 AG to save a captured Suyin and her family, Toph acted casually with her daughter. Unfortunately, this inadvertently did a good number on her nerves. Lin finally unloaded on Toph after Bolin received an answer to the question of who her father was.

She blamed Toph for never knowing or caring why she angered her so much. As Lin stated she wanted nothing more to do with her after saving their family, Toph solemnly accepted the words, stating that she would agree to it if that were what Lin desired. Bad parenting, right?

However, after they had successfully saved everyone, Lin apologized for her harsh words. Then, something improbable to happen was Toph admitting that she had not been the best mother. She maintained that she was nonetheless proud of how she had ended up with great daughters in the respite of this.

She also said that it was enough for her to know that Lin did not hate her; Lin accepted her words and shared a small hug.

Their relationship became a lot better after this event.

In 126 AG, Toph had her second daughter, Suyin, with another man, as she would later let us know. Her first relationship did not work out with Kanto. We, however, do not know the identity of Suyin’s father.

Suyin also inherited earth bending and mastery of the sub-skill of metal bending, although Toph felt that Suyin never quite mastered all the key elements of these skills. However, this should be expected from a bending master. Finding someone that cuts it must be next to impossible for her.

Due to how she grew up, Toph must have subconsciously decided to do the exact opposite of her parents. She gave Suyin and her sister Lin all the freedom that she did not have while growing up. It was clear that this was a bad movie, and it became even clearer when Suyin got arrested by Lin for being the wheelman for the Terra Triad. Lin apprehending Suyin and brought her to the station to her mother.

Toph tore up the report and sent her second daughter to live with her grandparents. She must have rethought the decision to let her have unlimited freedom at that point. Her best decision was to send her to where she would not have the freedom she had gotten so used to.

A year later, Toph retired, while Suyin went on to build the city of Zaofu. They both reconciled from the incident, and Toph would often visit before she went off searching for enlightenment. Unfortunately, Lin was not aware of this and blamed Suyin for her recklessness, causing Toph to retire earlier than she needed to. An angry Lin held on to this for about two decades, ostracizing herself from two of her family members.

While she resided in the Foggy Swamp, a spiritual center for energy and life, Toph kept an eye on Zaofu. It was here that she learned that Kuvira took Suyin and her family prisoner in 174 AG. Toph traveled toward the metal city to rescue them.

Upon being reunited with her youngest daughter, Toph let herself be hugged and readily returned the embrace. After successfully escaping the prison, Toph noted how proud she was to have such great daughters as Suyin and Lin.

Did Adult Toph Get Married?

Toph did not marry anyone, but she did turn out with amazing daughters who befitted wearing the Beifong name.

While Toph is not often openly kind, she showed a great deal of warmness and cared only toward her only granddaughter, Opal. During her visits to Zaofu, Toph would often tell her tales from her past.

In 174 AG, when Toph went to rescue her family, Opal rushed to hug her, an action Toph did not resist, although she cut it short and moved to hold Opal’s hands instead. This is something that Toph would not do to anyone else. Appraising her granddaughter, she fondly noted how much she had grown, though questioned her judgment when learning that Juicy was her flying bison and Bolin her boyfriend.

Toph is one of the characters who had children with bending skills passed on to the next generation.

The Adult Toph still managed to maintain some of the grit and irritation she usually carries. Her lack of enthusiasm. When Korra asks her to recall the story of how the Fire Lord was taken down, her reply was, “It was hot.” “And oh, I think a giant turtle showed up,” she added, as though it helped.

The Adult Toph still managed to contribute in whatever little way she could during the sequel to The Last Airbender series.