An Avatar is reincarnated again and again in the Avatar cycle, as END_OF_DOCUMENT_TOKEN_TO_BE_REPLACED

After the series ended, there was a robust public interest in knowing END_OF_DOCUMENT_TOKEN_TO_BE_REPLACED

Much like all our other heroes, they grew old and had kids. They went on to do great things. However, old Katara was not left behind as well. This article will discuss Katara’s life as she grew up to become old and older. Old Katara is a very weird Katara to see, but then again, everything changes with time. A lot of things happened to the team after the conclusion of the hundred-year war. There are several pieces of information on this in the comics to sate your curiosity. 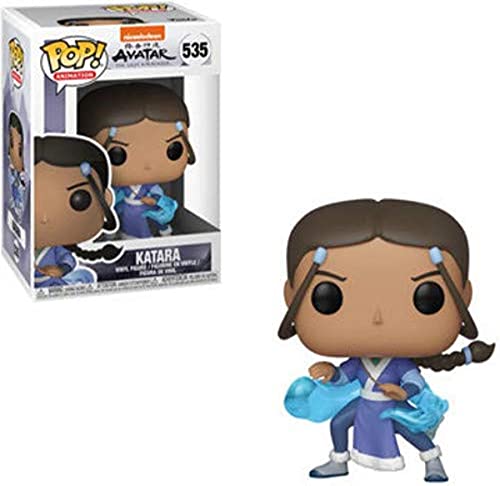 Funko Pop! Animation: Avatar - Katara Toy, Multicolor Learn More
We earn a commission if you click this link and make a purchase at no additional cost to you.

Katara After The War

In the year following the war’s conclusion, Katara and Team Avatar helped Fire Nation colonials resettle in their homeland. These people were individuals that had been temporarily displaced from their homeland and were forced to live in the Fire Nation. This action was tagged as the Harmony Restoration Movement. However, when the team came to Yu Dao, they were attacked by Fire Army soldiers and confronted by Zuko.

Aang and Zuko began to battle, but Katara managed to calm her boyfriend after entering the Avatar State. The Fire Lord explained that people of Fire Nation and Earth Kingdom descent lived together for generations, unlike in the newer colonies.

Katara and the team traveled to Ba Sing Se to discuss the Yu Dao situation with the Earth King, and while waiting, the two met a group of young women who had devoted themselves to Aang and Air Nomad teachings. This was the beginning of the Air Acolytes.

At first, Katara was somewhat jealous, but soon, she realized that they reminded Aang of his people. Unfortunately, the couple failed to change the current course of events. The Earth King planned on attacking the Fire Nation colonies.

Dejected, they quickly returned to Yu Dao to evacuate its citizens. At this point, they were met by the Yu Dao Resistance before they explained the impending attack. Enraged, Aang concluded that the four nations must remain separate after meeting the Air Nomad devotees in Yu Dao; Katara reminded him that the separation was an illusion.

As the armies arrived, Katara told him that she saw their own future as a couple of different nations reflected in the families of Yu Dao. Then, as the battle raged on, Katara propelled herself up to the Earth King’s war balloon to help convince him that he was fighting a battle against his own nation.

After the Earth Kingdom and Fire Nation agreed to make peace, Katara observed Aang welcomed his devotees as the first Air Acolytes. Avatar Gallery: Katara PVC Figure, 9 inches Learn More
We earn a commission if you click this link and make a purchase at no additional cost to you.

The couple (Katara and Aang) became very busy trying to restore displaced individuals to their homes. Katara, growing old, she and Aang, after the Harmony Restoration Movement, got married. Katara married Aang, and they gave birth to three children.

Bumi, the firstborn, a non-bender who gained the ability to air bend later in life; Kya, a water bender; and Tenzin, who was born an Airbender like his father, to begin with. Katara continued to develop her skills in waterbending, eventually becoming a leading expert in its various styles and respective skills and techniques and being regarded as the best healer in the world.

She passed on these skills to her only daughter, Kya, who became a renowned water bender in her own right.

In 124 AG, Katara wrote a letter to include in the book that Aang was assembling for Tenzin, in which she wished her son the joys of youth and the strength to accept his legacy as one of the world’s last airbenders. Sometime later in her lifetime, her only daughter Kya revealed her sexual orientation to her.

Old Katara was even more understanding and supportive of her than expected. She soon became the paternal grandmother of Jinora, Ikki, Meelo, and Rohan through Tenzin, who eventually married Pema. However, Tenzin had dated Lin, Toph’s first daughter, for a while. Unfortunately, it never worked out between the two of them.

As she grew older, more and more water benders would use Blood bending for their evil purposes. Before 128 AG, Katara’s efforts led to the outlawing of bloodbending in the United Republic. After the passing of Avatar Aang and his reincarnation into the new Avatar, Korra, she became the Avatar’s waterbending teacher once again.

Avatar The Last Airbender: Katara Action Figure Learn More
We earn a commission if you click this link and make a purchase at no additional cost to you.

After Avatar Aang passed away, his new incarnation Korra was fortunately born in the South Pole. She quickly manifested all three bending arts at a very young age. However, only when she trained with Katara did she truly get the hang of water bending and become a master. As at the time when the live animation series aired, Korra could hold her own in waterbending without a problem.

During one of her early training sessions with a young Korra, Katara taught her that waterbending was all about slow and calm movements. As we all know, Korra had immense issues with learning airbending as it was her complete opposite but elementally and in nature too. This was also the case in terms of waterbending. While she could freely bend the element, relying on brute force, true mastery was required to control and calmness, much like air bending.

Katara’s lesson did not stick with Korra. She, however, accidentally buried Katara under a pile of snow, not for the first time. This was when she tried to copy Katara’s moves which were clearly too advanced for her.

Uncovering the elder, Senna apologized for her daughter, though Katara brushed it off. She noted that she had battled more dangerous waterbenders during her life than the youngster. She also expressed a certain amount of confidence that Avatar will learn to control her abilities in time.

The session for that day did, however, get cut short by Tonraq, her father. Apparently, there was a huge snowstorm heading their way.

It took a while before they knew that Korra had gone missing. However, upon learning the next day that Korra had snuck out during that bad weather, Katara joined Tonraq and Senna to search for their daughter.

They discovered the young Avatar safe and sound with a polar bear pup. She expressed her desire to keep it. However, it was Katara that convinced Tonraq and Senna to let her bring the animal home. She noted that every Avatar had had an animal guide and that raising Naga may be exactly what the high-energy Avatar needed.

Afterward, Katara and Korra continued with their waterbending lessons. Korra often spent a lot of time in Katara’s healing hut growing up, where she taught Korra to mend wounds and broken bones. Korra eventually became a skilled healer under Katara’s instruction.

Funko Avatar Last Airbender 7pc 3.75" Pop Figure Set - Katara - Aang - Iroh - Sokka - Zuko - Toph & Appa Learn More
We earn a commission if you click this link and make a purchase at no additional cost to you.

In 170 AG, Katara supervised Korra’s firebending test alongside other members of the Order of the White Lotus. She noted the Avatar’s ferocity, to which the White Lotus leader responded that she also lacked restraint.

After Korra defeated her opponents, the White Lotus turned to Katara for counsel, wondering whether or not they should let Korra start her airbending training with Tenzin since the young Avatar had yet to grasp the spiritual side of bending.

Confident in her son’s abilities, Katara announced that she believed Korra to be ready to commence her airbending training, as Tenzin would be able to teach her what she needed to know.

As she expressed her joy overseeing her family again, Jinora approached her, informing her that she had read everything about her past adventures and asked what happened to Zuko’s mother, Ursa. Katara attempted to elaborate, only to be interrupted by an excited Ikki, who fired several random questions at the old Katara.

Old Katara did great things, and as at the time when we see her in Korra, she is over eighty years old.